Round four of the XTerra madness for the year. Going into it I wasn't expecting to do big things what with the two weeks of drinking in CO and the week off of athletic activity when I got back. Definitely NOT going to do that again. Ouch.
Drove down to SoCal on Saturday where I stayed with Nick, my friend/personal gear carrier and photographer. Had him drive to the race so I could sleep. I'm happy with that decision.
This race was at altitude at a ski resort. The distances were a little short compared to the rest of the races I've done this year, but in retrospect, this was a very good thing.

Swim: 1000 yards, two laps, split into two waves (Pros + under 35, and everyone else). TINY tiny lake. I felt like crap for the first part of the swim, I think mostly because of the altitude. Started to settle in about halfway through the first lap, and stopped most of the mental whining. I had mentioned that I don't have any swim pictures of myself to Nick, so he followed me around the lake (it was that small) and took a billion pictures. Good way to analyze my stroke! I ended up being the fourth woman out of the water (3rd amateur). Not so bad! 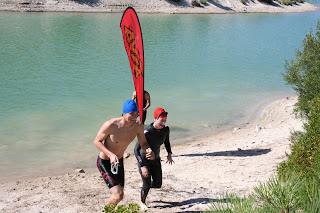 This is my favorite picture from the swim. There was weird algae at the swim exit that felt like hair and it got caught on everyone's faces. Here I am talking about it to my new friend.

Bike: 11 miles, one and a half laps. Holy. Crap. Aside from the initial "I suck at this game and my seat is too low!!!!!!!" temper tantrum I always have, I did pretty well on the climbs. Nick had commented that I should do fairly well on this course because the descents were technical. Not so much. I crashed four times on the first lap. All while descending. Even got a nice little endo in there which knocked the breath out of me and did a little rib adjusting. I managed not to die, and made it to the big long climb where I proceeded to get a flat. It was my second mountain bike flat EVER, so of course it was during a race. And of course I couldn't get my tire off and had to wrestle it for a while. It went back on very nicely though. Once I got going again I caught up to one of the guys who had passed me and we started talking about crashing. He crashed in the same spot in Temecula that I did. He broke his finger and DNF'd, I thought I broke my pelvis and DNF'd. As we discussed this, I went ahead and crashed again. We were climbing so it was slow, but I managed to find a nice pointy rock with my butt cheek. Yay. I got up, dusted off (again), and walked down all the stupid stuff to avoid any further crashes. Started to play leapfrog with a girl who would later be my running buddy for a while (she passed me on the descents, I passed her on the climbs). When I got off the bike I was bleeding from all four limbs. 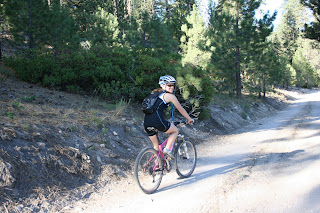 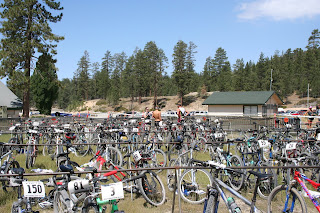 When I showed up to T2, I discovered that I had managed to set up at the same rack as Corad Stoltz, current XTerra World Champ and a guy whose blog I sometimes read. I was bloody and disheveled. They were done. I think I acted like a dumbass. Because I'm smooth.

Run: 4 miles. Course map looks like it was drawn by a small child. Most of the run took place in a giant field. To make it interesting/an actual course there were little "gates" made of orange tape that you had to run through. I would have gotten really confused if it weren't for my bike buddy. She used the word Fuck alot. It made me a little bit happy. The climbs on the run were like stair cases, except instead of stairs you had sand and rocks and pinecones. I decided to walk those, and even they hurt. I was wishing I still had my cycling shoes so I could kick my toes in and use the stiff sole to my advantage. I ran the descents and the flat stuff. It was hot and miserable.

I ended up getting second out of two in my age group, which is not impressive, but does get me more points to go to Nationals and keep my points leader status.

There was a push-up contest to win a free race entry. I lost miserably and am now sore about the armpits. Probably should have skipped that one.

Got stuck in traffic on the way home. Feel like I got beat with a baseball bat. Road (rock and sand?) rash on both elbows, one knee, and one butt cheek. I count at least four deep bruises on my legs.

I'll probably do it all again next year.

I thought this was a regular tri-event, so I assumed you were road riding. I'm thinking, "how can she crash 4 times in 11 miles?!" Mountain bike....makes total sense to this roadie.

That would make me a really accomplished crasher!