The trip to Utah definitely paid off. While driving for 26 hours through the uh...classy state of Nevada over a weekend is not really my idea of fun, racing in Ogden was awesome.

I left home at 4:45 Friday morning and headed east, stopping for a power nap somewhere around Auburn (caffeine hadn't kicked in yet). Lots of gas/food/potty breaks later, I got to Ogden, picked up my race packet, and got body marked. Had dinner with my friends who flew in earlier in the day, and met up with my host and his girlfriend at their house. They went out so I was able to get settled and ready for my race...except that I lost their dog for about 15 minutes and managed to spray water all over their kitchen. Oops. I cleaned up and the neighbor brought the dog back so I didn't have any awkward explaining to do. 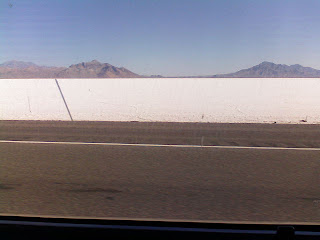 Salt flats on the drive to and from Utah.

Actually got a little bit of sleep, and left the house around 6:00 am to drive up to the race site. The drive up to the venue was gorgeous! A windy road through a tight little canyon took my up to the lake, with this little waterfall at one point. 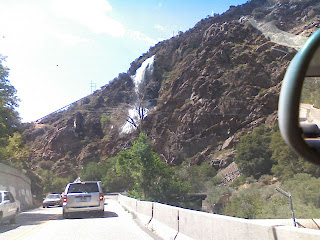 There were separate transitions for this race, so I got my T1 set up, then drove to T2, set up, and took a shuttle back to T1. Forced down some food, went for a little ride to get warmed up (where I noticed my front wheel was not exactly round...probably should have had it checked out after the crashfest that was Snow Valley), squeezed into my wetsuit, and swam around a bit.

The swim was two 750 meter loops with a short run in the middle of the loops (first time I had done a run like that). I'm not sure if it was because it was a bigger race than usual or because I didn't stay on the outside of the group, but it was the most aggressive swim I have done in a long time. Before the first buoy I had people touching me on both sides, feet in my face, and people trying to climb between me and the people next to me all at the same time. I never got hit or kicked, but if I had been claustrophobic I would have had issues. Felt good on the first lap (didn't really even notice the altitude), did the little run, dove back in, swam some more. The whole horizontal-vertical-horizontal body position element of running between swims is weird...my heart race went crazy when I started the run and it took a bit to settle back in to swimming. My second lap was slower than my first lap, probably largely due to the fact that I swam waaayy off course at one point. Need to pay attention better!

Finished the swim, got ready to ride, packed up my transition into a big garbage bag to be transported to T2.

I LOVED this bike course!!!!!! It kicked my ass, but it was a total blast. Tons of climbing, about 90% singletrack, fun swoopy just-technical-enough descents, and spectacular scenery. I didn't have any crashes this time...must have gotten enough out of my system in Snow Valley! Most of the climbing was pretty enjoyable, with the exception of the jeep road from hell that they snuck in toward the end. The gradient of the hill would have been painful enough on it's own, but it was also covered in 2+ inches of cocoa-powder silty dirt, making maintaining traction near impossible. So I pushed my bike up it. Other people were too, so I feel justified. Eventually the traction got better and I got back on, but the hill just kept going so I found myself singing a rousing verse of "This is the hill that never ends...yes it goes on and on my friends..." a la Lambchop's Sing-along.

Anything to keep the entertainment level up there.

Happily the climb was followed by another awesome singletrack descent, where I managed to pass the people who had passed me on the climb. While I was riding the singletrack I noticed my bike being excessively loud. The trail was rocky and bumpy so a certain amount of bike noise is to be expected, but this was getting ridiculous. When I got into transition I was greeted with a bottle cage clinging to my bike by one bolt, swinging around in my frame. At least the bottle was still there....


The run was actually not that bad, when considered as a whole. The first part sucked because we had to run up the steep, silty, never-ending hill again. But when we got to the top, the course ducked into some singletrack and stayed there for a couple miles. We were in trees which I appreciated as I was getting a little burned. It was pretty rocky again which was nice because it was different than typical runs, but I was pretty beat at this point and paying attention to my footing took some effort. At one point I tripped on a rock and fell, landing on both knees and sliding a little on my side and arm. Got up, checked for injuries (mildly bloody knees, some scratches on my arm, and a scrape on one knuckle), kept trotting along. Tripped a couple more times, but managed to stay off the ground. Met up with one guy who declared the race "the hardest non-iron distance race" he had ever done. The last mile or so was downhill so I tried to catch a woman in front of me (who I think was actually doing the short course...oh well). I got within a few feet of her right before the finish, almost fell again, and she just beat me to the line.


Hit up medical to clean up my knees, took a wet paper towel bath in the (fancy) bathroom at the finish, and loaded all my crap in the car. I followed my friends/XTERRA "parents" to some fast food place where we proceeded to gorge on ice cream and fried foods (chicken tenders and fries for me!) Went home, showered, and took a nap before the awards ceremony.

The awards ceremony was held in the Ogden Outdoor Amphitheater and was really well done, with free food for all racers from an assortment of local restaurants. Medals were handed out ( a red one for me!!), a short video from the race was played, and a live band took over for the night.

I got up in the morning to breakfast courtesy of my hosts (SO nice!), got in the car, and drove the 13 hours home. Good times.