I seem to be continuing my blog-slacking streak. Oopsie.


In early June I packed up the bike and headed east for a long weekend of visiting my mom in Maryland and racing in Richmond. As is to be expected it was HOT and humid, but it was tolerable. Day 1 highlights were puppies, the mini donkey, and Walmart people watching at my mom's small town and mini-zoo. We drove down to Richmond the day before the race, right in time for a thunderstorm that prevented any pre-riding on my part. The restaurant we found for dinner was fabulous though, so I really don't mind.

Swim: this was probably the most comical swim leg of a triathlon ever. It takes place in the James River in the middle of the city, and the start takes place under a railroad bridge. The water was silty brown, so visibility was about 6 inches. The riverbed is studded with massive boulders, some completely submerged, some poking out like icebergs. The course is shaped more like a star than anything, so there are plenty of opportunities to change direction to fight or take advantage of the current. We were warned about the current repeatedly, but I didn't find it to be any worse than in Waco. The water temp in the James was about 75 degrees, which is waaaaay too hot for my tastes, even without wetsuits. I came out of the water 4th in my AG, after getting fairly battered on submerged boulders and the like. There was a submerged sandbar in the middle of the river, so I swam over and ran across it to avoid the current for a bit. I wasn't the only one. 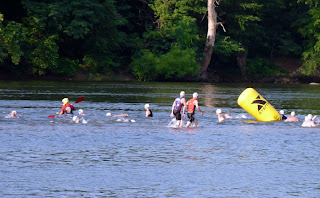 Bike: This bike course was FUN! It takes place in an urban park, so there were plenty of man-made obstacles to ride over, under and through. Almost exclusively singletrack, and almost always under tree cover, this is my kind of riding. While there were no giant climbs like we tend to have at the western races, there were plenty of rolling hills and enough techy steep climbs to make life difficult. We rode over ramps and bridges, through tunnels, dodged trees, crossed streams, and navigated roots and rock gardens for two glorious laps. I had one crash where I lost my front wheel on a slick bit of rock, resulting in a bruised arm, scraped knee, and a bruised nose from impact from my glasses. I almost got run over by World Champ Conrad Stoltz. 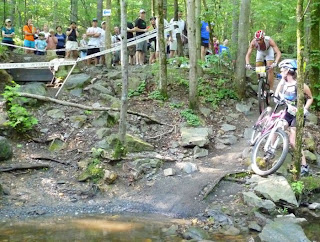 The cool part of it being a two lap course (and my being slow?) was I got lapped by the pros. Shonny and Melanie were together when I saw them, and I later found out Shonny put another 3 minutes on Mel for a pretty decisive win. The not-so-cool part was the heat, which was definitely getting to me as the day warmed up.

Run: The run was the least fun part. It was nearly all exposed (read: boiling hot) and a lot of it was on sidewalks and gravel roads. There is a section called the Mayan Ruins that features giant railroad ties as stairs, and requires some scrambling to get up. Another fun section was over sometimes-submerged river rocks, where the "trail" was little more than arrows painted on the ground. A ladder to climb out completed that bit.

I didn't qualify for anything, and didn't race or place particularly well, but I had a blast and will do it again. Next time I'd like to pre-ride, and I may have to seek out some heat for training to help deal with the eastern summer temps.


Next up, XTERRA Tahoe City!